What It Means to be a Club Sport Advisor

Published 5 years ago 5y ago

Every family has a leader. The role may be different when you look at a conventional family, but for the Maryville Men’s club rugby team it was clear from the beginning. It’s a female.

A whole mix of players founded the club. With difficult beginnings and a tough time recruiting, the players wanted to make the club legitimate in efforts to gain more members. The last piece of the puzzle was adding a faculty advisor.

Malia Dunbar is the assistant lab manager and biology coordinator. “My role began back in 2011 when a former student approached me within the first few weeks of classes. He was in one of my late night biology labs and he put down this funny looking football on the table. I thought, ‘What the heck is that?’’’ Dunbar said. She had no knowledge of what rugby meant or how it was played. It didn’t matter. “He described it to me as if soccer and football had a child.”

The position is a volunteer role, often times needed during work hours and can be a distraction from the day to day work. When asked if it got in the way of her job Dunbar commented, “Not really. I’ve always found a good balance between my work and the team. I wear several different hats with being on the alumni board and being heavily involved; the team knows I’m focused on them despite my lack of attendance at certain times of the year. They’re worth it.”

Time and commitment can be an issue for student athletes. When you add another role into the mix, it can be challenging to have trust in others. “The team functions on its own, if there is an issue then the team addresses it and handles it. However if I am needed, I try to keep times open for them. My door is always open if the players need anything social or academically based. I feel like that’s where I can help the most.”

As the faculty advisor, Dunbar is the liaison between the club and the university. With the PlayMaryville initiative taking flight, there are more and more club teams being added each academic year. One of the responsibilities of the position is keeping track of grades, and ensuring every student athlete is registered as a full time student. “Student first athlete second. I’m here as a resource.” Dunbar said, “I just try to make sure if there is anything they need, they know where to turn. I try to give advice on classes to take, where good places to study are, things of that nature.”

Given the nickname of “team mom,” Dunbar said there was no getting out of it. She had to accept it. With a smile on her face she explained, “What I really enjoy the most is the connection. Being able to support club sports in general. We don’t get school funding or full time scholarships to hand out. It’s something the kid are passionate about and choose to do. I love that.” Dunbar said. “I enjoy watching the game now, it was a no brainer for me to help out in some way. I’m so glad I get to be a part of their success in the classroom, and on the field.”

It is important to be involved on campus. Don’t be afraid to start something you are passionate about. Find a faculty advisor. Get involved. Be great. It’s the Maryville way. After two and a half years I can say confidently that club sports has changed my life. Some of my best friends have come out of my club sports team. It allowed me to be involved on campus with other teams and student organizations. I cannot say enough about the support I received here on and off the field.

END_OF_DOCUMENT_TOKEN_TO_BE_REPLACED

ShareTweetShare on Google+Pin on PinterestSend with WhatsApp
28 recommended

END_OF_DOCUMENT_TOKEN_TO_BE_REPLACED

Jobs Podcast by Kailya and Ryley 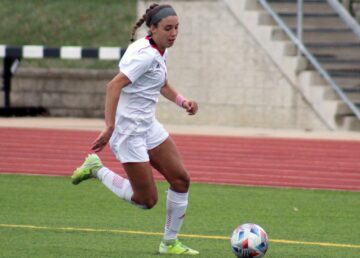 Halle Ezell is a Sophomore at Maryville University. Before Maryville, Ezell Played for the Oakville High School in St. Louis, Missouri. During her senior year at Oakville High School, Ezell had scored two goals and four assists for the Tigers. Ezell says that ... END_OF_DOCUMENT_TOKEN_TO_BE_REPLACED

In this weeks episode Emma and Makenna once again venture around MU to ask the Saints some personal and fun questions. Tune in to find out what the last text Lucy sent to her mom is and Carl’s least favorite major. And that’s What’s Happening, MU! SochaMore Po... END_OF_DOCUMENT_TOKEN_TO_BE_REPLACED

Be Kind to Others